San Diego Retina Associates offer a collection of webpages with understandable facts about causes, symptoms, risk factors, diagnostic testing, treatment, and prognoses of an array of retinal conditions. Each webpage also offers a printable PDF fact sheet for your convenience.

A healthy retina is necessary for good vision. The eye is composed of light-sensitive cells connected with nerve fibers that allow light entering the eye to be converted to nerve impulses that reach the brain. The amount of light entering is controlled by the iris and is then passed to the retina. The retina is a thin membranous lining at the back of the eye. 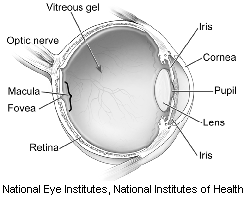 It is this light-sensitive nerve tissue that controls how images are viewed. The images are focused here and converted to electrical impulses which are carried to the brain by the optic nerve.

Diseases and conditions of the retina

To examine the retina, an ophthalmologist will dilate, or widen, your eyes during a comprehensive examination using eye drops. A retina specialist then uses a special magnifying lens to exam your retina. The dilation will reverse after several hours. 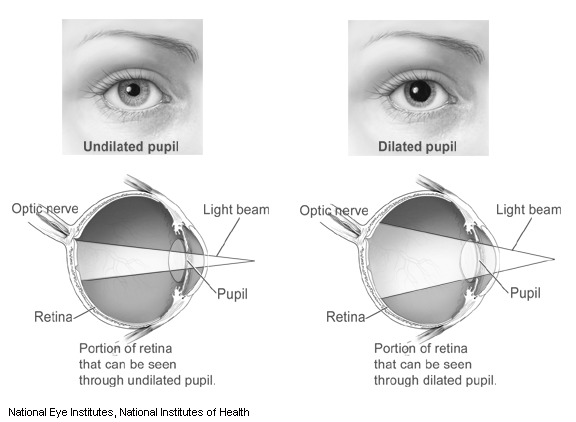 Call for an Appointment

Your treatment plan is designed for steady progress, with every phase promptly implemented.

(AMD) is a deterioration of the retina and choroid that leads to a substantial loss in visual acuity (sharpness of vision). AMD is the leading cause of significant visual acuity loss in people over age 50 in developed countries. narrows down significantly.

In early stages, AMD may have no symptoms at all. When the disease progresses, the symptoms are:

As the macular degeneration progresses, AMD symptoms include:

Causes: The exact cause of AMD is unknown, but the condition develops as the eye ages. There are 2 types of AMD: non-neovascular or dry AMD; and neovascular or wet AMD.

In early stages of dry AMD, the hallmark is drusen—pale yellow lesions formed beneath the retina (Figure 1A). Drusen are usually harmless, but as they accumulate, dry AMD can progress. Atrophic areas (areas of atrophy or wasting) in the retina also may develop; if the atrophic area is significant and with sharp borders, it is termed geographic atrophy (GA) (Figure 1B).

GA is the advanced form of dry AMD, which is frequently associated with loss of central vision.

In wet AMD, there is a sudden or gradual decrease in visual acuity, blind spots in the center of vision, and distortion of straight lines. The hallmark of wet AMD is choroidal neovascularization (CNV) (Figure 2).

CNV occurs when abnormal blood vessels grow beneath the retina; these can bleed or leak and cause a distortion of the retina’s structure. Ultimately, the CNV can turn into a disciform scar that replaces the normal architecture of the outer retina and leads to permanent loss of central vision.

Many people ask if age-related macular degeneration can be prevented. Like most things in life, there is no easy answer.

The primary risk factor for AMD is age—the older you are, the greater your risk.  Also, people with a family history of AMD are at higher risk, as are women and people of European descent.

Some lifestyle factors are also known to increase your risk for AMD:

Disease features related to AMD may be found in the retina and in the layers beneath it. According to these abnormal findings, AMD is classified as dry or wet.

An AMD diagnosis is made by a clinical examination with a slit lamp and by using several types of imaging, including:

Wet-AMD treatment has been revolutionized in recent years after the discovery of vascular endothelial growth factor (VEGF), a family of compounds in the body. VEGF regulates the growth of abnormal new blood vessels in the eye—known as neovascularization—that can lead to wet AMD. Anti-VEGF drugs have been developed to help stop neovascularization and preserve vision for AMD patients. There are currently 3 anti-VEGF drugs: Avastin® (bevacizumab) Lucentis® (ranibizumab) Eylea® (aflibercept) Wet AMD cannot be cured, but its progression may be blocked with the use of intravitreal (in-the-eye) anti-VEGF injections. Local anesthetic eye drops are given before the injections to numb the eye and minimize discomfort. There are 3 anti-VEGF treatment regimens: Pro re nata (PRN) or “treat and observe”—patients are treated with three initial monthly injections, followed by treatment as needed. “Treat and extend”—after 3 initial monthly injections, the time between treatments is gradually increased until wet AMD is stabilized. Monthly injections. Before the first anti-VEGF drugs were introduced, wet-AMD patients were treated with laser photocoagulation or photodynamic therapy (PDT). Anti-VEGF drugs have greatly improved wet-AMD treatment since 2005; patients today have a much better chance of maintaining their central vision so they can read, drive, recognize faces, and live normal lives. No treatment can prevent visual loss for patients with GA (the advanced form of dry AMD). However, the Age-Related Eye Disease Studies (AREDS), conducted by the National Eye Institute, have found that a nutritional supplement formula may delay and prevent intermediate dry AMD from moving to the advanced form. The AREDS supplement formula, which is widely available over the counter, contains: Vitamin C Lutein Vitamin E Zeaxanthin Zinc Although patients with either form of AMD can experience a severe decrease in visual acuity, they will almost never be completely blind.